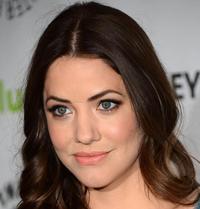 Julie Gonzalo is the star of the hit TV show Dallas. She has been prominent since around 2004 appearing in teen movies such as “Cinderella Story” and “Freaky Friday”.  Julie originates from Buenos Aires but now lives in los angeles.

Julie had her screen debut in 2003 in the comedy show “Greetings from Tucson.”  We discovered that she recently starred in a movie called “Waffle Street.”  Naturally we were intrigued about this movie purely because of the name!  It turns out that the movie that stars Danny GLover and James Lafferty and the story focuses on the 2008 wall global financial meltdown.

This model bears a slight resemblance to Julie Gonzalo and has appeared around the web touted as a lookalike bearing her name.  We are not quite convinced and think that it is either a failed attempt at reproducing her or a mistake made by someone.  Either way we have included her in the database and will let you make the final judgement!

RM Veronica is created for Victoria 4 and requires Victoria 4 morphs++.  It is a beautiful model in it’s own right and includes mutliple high quality textures and rendering presets.

No Painted on Reflections

Poser version has both shader and non shader enhanced options