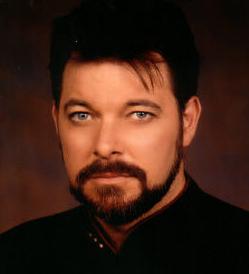 Star Trek: The Next Generation fans will no doubt be very familiar with the american actor Jonathan Frakes.  He starred in the famous television show as commander William T. Riker.  He began his career in a somewhat unusual manner working as a captain america lookalike for marvel comics.  During their conventions he would appear in full costume to the delight of comic book fans!  He appeared in a number of famous TV shows during the seventies and eighties including The dukes of hazard and Hill Street Blues.

He is not only a famous actor but also starred and directed in two Star Trek movies.  These were Star Trek: First Contact and Star Trek: Insurrection.  He has also directed various episodes of the show itself.

Nathan is a typical offering from Jepe,  built for Michael 6 and Genesis 2 Male.  Of course it includes all the regular extra’s that come with Jepe’s creations.  These included multiple body and facial hair options.  Additionally there are Iray materials included for the head and body textures and daz or poser presets.  The character has a cool beard option which is a nice addition.  It is a typical star trek style beard which looks perfect for him!

In conclusion we would like to say a big thank you to Jepe at Daz Studio.  We can’t wait to see your star trek recreations so please drop a comment in the review section.

We use cookies to ensure that we give you the best experience on our website. If you continue to use this site we will assume that you are happy with it.OkRead more