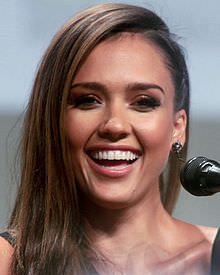 This is a classic morph created for Victoria 3.  Her facial morph is well made for a figure of this early generation and still holds up against newer figures.  The textures are photo based and look good.  If you have the Quarkers Sapphire Fox Hair prop you get some nice extra’s thrown in such as a few materials and fitting morphs.

Finally we have a bunch of other Jessica Alba characters for your to check out below.  Please rate and review this character!

Be the first to review “jessica Alba – rianne” Cancel reply