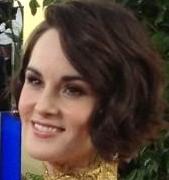 Calling all Downton Abbey fans!  Michelle Dockery is an English actress famous for her role as Lady Mary Crawley in the ITV television show “Downton Abbey”.

She began her career in 2004 starring in “His Dark Materials”.  Following on from this she starred in various other shows, before being cast into Downton Abbey in 2010.

Additionally we found out that she starred in a move called “Shades of Beige”.  Naturally we haven’t seen it as the title sounded very boring!  Have you seen it?  Leave a review!

Michelle has done very well for herself and earned many awards including a Golden Blobe Award and several Primetime Emmy Awards.

Imogen is an attractive character.  She works great with Victoria 6. Of course when used with the girl 6 she looks more cartoony but that is the intention!  Included with the two character presets are a variety of makeup and eye textures including full body materials.

Additionally there are subsurface material presets for Daz Studio Age of Armour.  Imogen works great in Daz Studio and Poser.  Please let us know what you think about this character and leave a rating.